Week 6: The Layout of the Spanish Collections, Velasquez’s Technique and Alonso de Cárdenas at the English Sales


Velasquez and his Rivals.[1]

Thanks to the wily machinations of Olivares, the Spanish Foreign Minister, Velasquez made headway at the Spanish court. Olivares’s Sevillian connections didn’t do any harm either as Velasquez had made a name for himself in genre scenes of that city. He also produced early high quality portraits, but still found it difficult to break through at court. Apart from the convoluted bureaucracy standing between him and the King, there was the problem that Philip IV already had 5 painters on the royal payroll: Santiago Morán the Elder (pintor de cámara); Vincente Carducho; Eugenio Cajés; and Bartolomé González (all pintores del rey, or painters to the King).  There was the remaining pintor del rey, the enigmatic Francisco Lopez who probably aligned himself with Velasquez’s foes because he had professional and personal ties with these artists. Despite these obstacles, with the help of Olivares, Velasquez broke through at court. His life changed dramatically for the better when he was put on salary by the royal household and given the accolade of the only court painter allowed to paint Philip IV from life. Naturally, the young painter’s rise occasioned jealousy and political factionalism, not least because his employment arrangements were superior to the others. Unlike the others, Velasquez was given his own studio on the main floor of the King’s chief residence- the Alcázar of Madrid. Usually these rivalries would smoulder in the background, but on occasion they would flare up in the context of some competition orchestrated by the King, like the one of 1627 on the subject of the Moors expelled from Spain.[2]

The Layout of the Pictures at Alcázar

The competition between Velasquez and his rivals took place in a chamber newly created by Gómez de Mora. This was a large two-story chamber above the main entrance to the Alcázar. This “New Room” soon became a space for showing masterpieces from Philip IV’s collections. A number of pictures- such as a portrait of Philip III by Gonzales- have been lost. This would have been linked with the “Old Regime”, but Velasquez was asked to paint pictures for the new order. He was asked to painting an Equestrian Portrait of Philip IV to complement Titian’s Charles I at the Battle of Mühlberg. Velasquez won the contest with his Philip II and the Expulsion of the Moriscoes from Spain, lost. Gómez de Mora also created a “South Gallery” when he erected a screen across the southern façade of the palace. To fill his galleries, Philip drew on artists from abroad. So the King’s ambassador went to Rome to commission four paintings: Abduction of Helen (Reni); Hercules and Omphale (Artemisia Gentileschi); Sacrifice of Isaac and Solomon and Sheba (Domenichino). Apart from Reni who threw a tantrum and took his picture back to Bologna, these pictures were installed in the “New Room” in the Alcázar. To augment these, Philip IV also commissioned art from the Spanish Netherlands. We know from the eye witness account of Poussin’s patron, Cassiano dal Pozzo that the Ulysses Discovers Achilles amongst the Daughters of Lycomedes which is thought by some to be a collaboration between Rubens and Van Dyck, hung in this gallery also. Rubens had offered this picture for sale to Sir Dudley Carleton, in 1618.


An Interlude: Velasquez’s Pigments & Technique[3]
Velasquez mainly painted on linen canvas, though occasionally he used a canvas made from hemp. All were usually of a regular weave. He tended to use oil as a binder. For his pigments, Velasquez conformed to those commonly used by other 17th century painters.[4] Velasquez used three principle BLUE pigments: azurite (drapery in Vulcan, Breda); blue verditer; ultramarine (mixed with red lake to create purple in Coronation). Sometimes the inexpensive pigment smalt was used (blue for skies of Vulcan). GREEN underwent substantial changes in the 17th century. Velasquez mixed different colours to obtain green. For instance, in Vulcan, green consists of azurite, yellow lake, and possibly some yellow ochre. Malachite is rarely found in the 17th century, but the foliage in the foreground of Breda might be an example. EARTH COLOURS like brown, red and yellow ochres are quite common in 17th century painting. In the Breda, the trouser leg of Spinola are made up primarily of ochre, brown ochre and umber. The main RED pigments available to artists in this era (in addition to red ochre), vermilion, red lead and red lakes. Vermillion = “synthetic variety of cinnabar” (bar of metal in Vulcan); red lake found in most of Velasquez’s paintings (red sash in Breda, drapery in Coronation). In addition to yellow ochre, the other main YELLOW variant in Velasquez’s time was lead-tin yellow (Vulcan). BLACKS & BROWNS such as charcoal and bone black are found in most of Velasquez’s paintings. The main WHITE universally present in Velasquez’s works is lead-white.[5] Little is known of how Velasquez began his paintings or drew in his compositions. It is thought that thin black or brown paint “to define forms over the ground.” A sketchy under-painting with little more than contours of figures was consistent throughout his career. He applied single layers of painting, modulated in tone and hue, with lighter and darker strokes brushed into the underpainting, sometimes before it was dry. 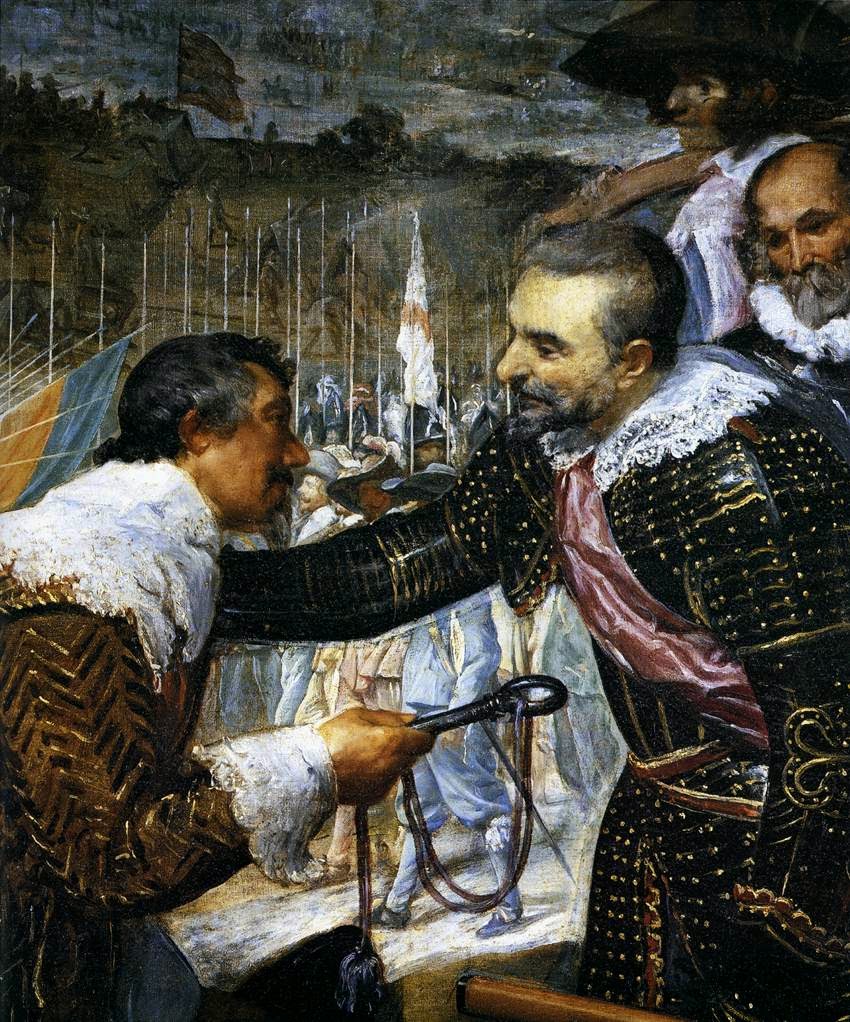 While Velasquez was furthering his career at court and advancing towards the disintegration of form in his technique, his countryman, the Spanish ambassador, Alonso de Cardenas was lurking amongst the pictures on sale at Somerset House. Cárdenas had arrived in London in 1635 as “resident agent”, but had been made ambassador in 1640. Charles I dismissed him as “a silly, ignorant, odd fellow” though as Jonathan Brown has shown, Cárdenas was a shrewd operator, a man with an eye for the main chance where acquiring pictures for his monarch was concerned.  Cárdenas had briefed Philip IV in 1645 that the Parliamentarians were intending to sell Charles I’s paintings to which the Spanish replied that his ambassador should find paintings “which might be originals by Titian, Veronese, or other old paintings of distinction.”  Philip gave strict instructions that Cárdenas should not reveal the name of the purchaser. As Brown says, this arrangement was “unrealistic in the extreme, but does explain why Cárdenas never bought any pictures from Somerset House. Cárdenas funding came not from the King but the royal minister, Luis de Haro who was mentioned last week. Fortunately for Cárdenas, he did not have to compete with other major buyers during the commonwealth sale. Mazarin’s representative had been expelled in 1651; Leopold Wilhelm had Hamilton’s and Buckingham’s collection to keep him occupied; and Queen Christina of Sweden could have posed a threat, but she had looted the castle at Prague so she was satisfied with her art treasures. So with a clear field, Cárdenas attended Somerset House to inspect the goods and to draw up some kind of list of what he considered the most desirable pictures. As Brown ruefully observes, “it is a document certain to bring tears to the eyes of every English citizen who loves the art of painting.”  This memorandum lists 60 works on show at Somerset House, Hampton Court, and St James’s. Paintings by Titian were especially desired by Cárdenas, though he was no fool when it came to knowing about art. For example, the painter’s Adlocution of the Marquis del Vasto “would have been worth £1000 if it were not worn in many parts.”  But he was spot on because he judged Titian’s Christ at Emmaus and the Entombment (valued at £600 each) to be better paintings. Sadly, the painting that most excited the curiosity of Cardenas has been lost: a Giorgione showing Solomon worshipping the Idols.  Cárdenas obviously took advantage of the dividend situation and managed to acquire art from these holders of impressive old masters. Amongst these were Tintoretto’s Christ Washing the Feet of the Apostles, Correggio’s Education of Cupid, Palma Giovane’s David and Goliath and Conversion of St Paul, and portraits by Dürer.  In the sanctuary of El Escorial, Velasquez had installed some of Charles’s pictures including Andrea del Sarto’s Madonna and Child with Saint Matthew and an Angel and Tintoretto’s Christ Washing the Feet of his Disciples The sacristy would have been visited by the English ambassador who was trying to return the pictures to London. Needless to say, he failed miserably!

12)   Juan Gomez de Mora, Plan of the Main Floor of the Alcazar of Madrid in 1626, Vatican, Biblioteca Apostolica.